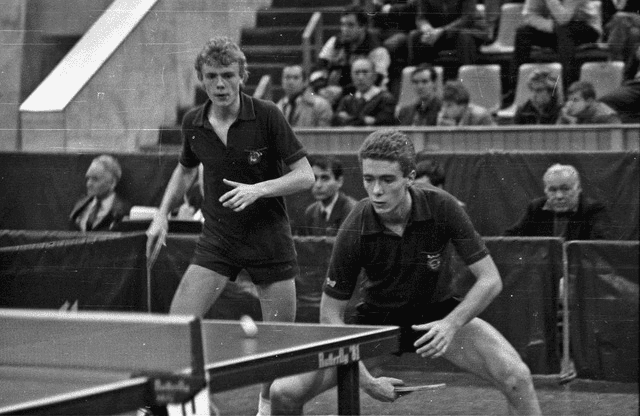 What is the brief history of table tennis?

Where and when did it all start, and who invented table tennis?

How has table tennis progressed to this day?

Find out everything below…

When did table tennis start to be played?

Table tennis originated in Victorian England, where the upper class played after dinner. They did not have table tennis nets at that time, so they used books as racquets and as the net in the middle of the table instead.

This happened at the beginning of the 20th century. Before that, an improvised table tennis-like game was attempted in the 1870s by British military officers. The name ping pong was in wide use until table tennis finally got a trademark in 1901.

That same year, a British enthusiast discovered celluloid balls on a trip to the United States. As the popularity of this sport grew, E.C. Goode invented the modern racket by gluing pimple rubber to a wooden ping pong blade.

So, people played table tennis until the 50s, when the first evolutionary step was to use rackets with sponge rubbers, leading to higher speeds in the game. Later, fast glues were used, and then it started to play quicker and faster, but also for the sport to get real meaning and beauty. As an Olympic sport, table tennis was first introduced at the Olympic Games in Seoul in 1988.

The first man to make a table tennis game to play on the table was David Foster. The ball was 30mm rubber and covered with cloth. Foster also introduced rules that later found Steve Grant (USA).

He is considered the first inventor of table tennis because he filed his first patent. To clarify, he did not invent the game but took the first real step toward this game’s existence.

The game was created by John Jaques & Son and registered a variant of this sport, “gossima.” This is most similar to table tennis except that they used other equipment. The earliest game of David Foster’s Parlor Table Games took place in England in 1890.

A very important year in the history of table tennis was 1900, when Englishman James Gibb returned celluloid balls from England to the United States.

Another reason why this year is important is the name “ping pong,” which, according to most sources, is also attributed to the already mentioned James Gibb. The idea came to him because of the sound the ball makes every time he bounces off a table tennis table.

The following year, table tennis was brought to China via western settlements and became increasingly popular on the Asian continent.

How has the game progressed throughout history?

There are several essential periods in which table tennis abruptly changed the direction and style of play. Here we will show those evolutionary periods. Before that, take a look at what the early history of table tennis looked like.

In the beginning, people played it on a dining table with improvised equipment. With the introduction of celluloid balls, the game progressed greatly, and this happened in 1900.

The following year, a table tennis association and a special Ping Pong association in England were created. The game was also presented in China, and in Europe, it has progressed significantly and become more popular. One important step was the establishment of the International Federation of ITTF in Berlin in 1926. Then, Ivor Montagu became president.

The difference between the “hardbat” and the later racket is in the racket itself, making a big difference in its dynamics and strategy. Classic “hardbat” rackets are slower and use external “pips” without sponges. It is harder to turn, and it is harder to perform the ball’s rotation. Table tennis players played more on clean balls and strong shots.

During that period, more precisely in 1937, there was a change in the rules. The net dropped to 15 inches (15.24 cm), which encouraged a more aggressive game.

Thus, the players became more focused on attacking instead of keeping the ball on the table and waiting for the opponent’s mistake. Then the time limits for the duration of matches were introduced by the ITTF.

In this period, we can single out important events such as:

At the world championships in the 1940s and 1950s, the Japanese women’s team dominated with a total of 8 titles won.

Hungary was a great world power in the men’s competition with 12 titles won.

Otherwise, the World Cup was held every year until 1957 and then every two years. In individual table tennis world championships, men’s singles, women’s singles, men’s, women’s, and mixed doubles are included for each odd year.

The beginning of the Asian era is also reflected in the first World Cup held in Bombay, India. This world championship was the 19th in a row and only the first in Asian territory.

It so happened that the first non-European winner was Hiroji Satoh from Japan. Japan began to make significant progress when Ichiro Ogimura developed physical training and technological development.

In 1956, the first Asian player to win the World Cup was Tomie Okada-Okawa of Japan. Another important event in this era was the first Paralympics in 1960. Throughout history, table tennis has started to be included.

When it comes to rules, a law on racket standardization has been passed. However, in addition to Asians, we should not forget the Swedes, who were the best in the 70s and 80s, side by side with China.

One of the memorable events from this period is definitely 1980 at the European Championships.

John Hilton (born June 25, 1947) achieved a sensational victory in the individual competition. The odds on him were 1000 to 1, and he managed to surprise everyone.

He is the only British player to win a gold medal at the European Table Tennis Championships in individual competitions.

Why is this important for the history of table tennis?

The authorities in table tennis had to change the rules because of Hilton. He confused his opponents because he had different ping pong rubbers with the same colors on both sides. Opponents could not recognize which was defensive and which was offensive rubber.

Therefore, he surprised all the opponents by using different ball strokes. Then ITTF changed the rules, and after that, all table tennis rackets had to have different colors of rubbers. The ping pong table dimensions are still the same. This made it clear to the opponent which rubber was antispin and which was offensive, and thus players achieved a higher fair play. 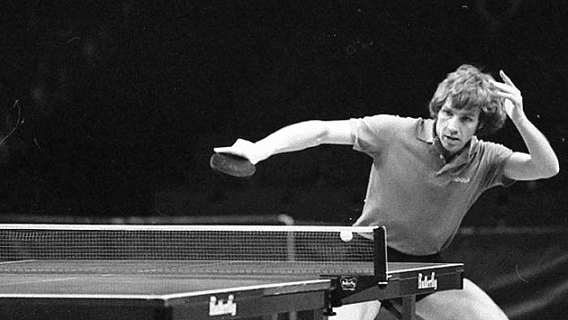 1983 was also a significant year for my country when my fellow citizen Zoran Kalinic from Subotica became the World champion in doubles with Dragutin Surbek in Tokyo.

For the first time in its history, nations presented table tennis at the Olympic Games in Seoul in 1988. During this period, ITTF adopted several important rules of the game.

International Table Tennis Federation increased the size of the ball. The ball’s diameter is now 40 mm. It happened because of the speed of the game. Players worldwide have increased the speed of their shots so much. Due to the popularity of sports and television, the ball’s diameter is increasing to slow down the game and make table tennis more beautiful for the audience.

That happened in 2000, and the following year another rule appeared. The winning set moves from 21 points to 11. Since then, three sets won, even in big competitions, and four sets up to 11 points players need to win for the match. 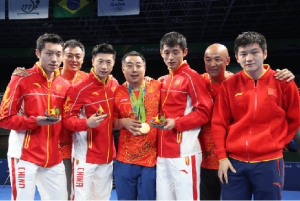 Another important rule that applies today is to replace the celluloid ball with a plastic one. Since 2016, table tennis players use plastic balls at both, World Championships and the Olympics.

It was officially the beginning of a new era in the history of table tennis. His topspins from the backhand showed that there are no more forehand reinforcements and backhand keeping a safe ball. The moment came when all the players in the world started working on spins and reinforcements of the ball on both sides.

Another important skill is the entry of the “banana” backhand flip, which all modern players use. It is the entrance to the opponent’s serve with a backhand flip from the wrist. You can see this skill live on the site, more precisely on the Skills For Advanced Players page.

All in all, throughout history, various table tennis players have appeared who bring novelties to this beautiful sport.

What’s next? We will see, mostly new faster moves are always current, and you can see how much the World’s players are in that in the following video.

Summary – Rules through the history of table tennis

There are a few more important rules that I will single out, and that is why they are briefly written here. As a reminder for all today’s players, I hope it will help in further play and enjoyment of this beautiful sport.

This means that each racket must have one red and one black rubber for the opponent to distinguish the rubber type with which you hit the ball.

For example, if a player has an anti-spin rubber on one side that slows down the game and gives an entirely different effect of the ball when hitting, you can see that. While the rubbers on both sides were the same color, you couldn’t recognize the difference.

The number of winning sets

This has changed during the history of table tennis. The first being in 2001 when the number of sets to win and the number of points to one set changed.

Many years ago, table tennis players played to 21 points and five consecutive serves from one player. At the tie break (20:20), each player had one serve until someone won by two points. Then it was necessary to win two sets to win (best 2 of 3 games).

The ITTF changed the rules in 2001 and introduced a set of up to 11 points, with each player having two serves in a row with the tie break now being at 10:10. Players must play as best 3 of 5 (with 3 sets won) and best 4 of 7 (with 4 sets won for more significant competitions).

In 2003, ITTF adopted rules to remove the non-racquet-holding hand to unblock the opponent from seeing the entire wrist movement.

Before that, players could “hide” the serve by covering the racquet-holding hand during the ball’s contact. The ball must also be thrown straight up a minimum of 16cm with an open hand. With these rules, a lot has changed in general in most players’ games. And somehow, players achieved a greater fair play because the players who had excellent serves and managed to hide the service had a huge advantage even though they were equal to their opponents.