Truls Moregard has put his nation at the top position in the table tennis World championships and European competitions through his excellent performance and constant wins. He has even defeated remarkable table tennis players from China and Japan, which sets him apart.

He is excellent and has many achievements that this article will highlight too. Truls has a unique style of play, and he is a master of it. Many can attest to that just by seeing how he plays. From there, you can also see his deep love for the game.

This article will also highlight his life story and how he started playing table tennis.

Truls Moregard was born into a family of table tennis players. His brother, Malte, was a player on the Swedish national team at the cadet and junior levels, where he used to practice a lot with their father, Carl.

They also had a table tennis table in their home where the practice was done when they were not in their respective clubs for training.

At the age of seven, he began training at a local club in his home area in Vaxjo. Truls constantly wished that one day he would be great like his brother Malte. He put so much effort and commitment into table tennis, fulfilling his wish. He exceeded his expectations by becoming one of the best table tennis players globally.

VISIT WIKIPEDIA FOR MORE DETAILS!
Besides that, he could play football and chess like a professional. But his passion was in table tennis, and he knew that for him to excel, he needed to focus on one sport.

He played football and chess mostly during leisure but chose table tennis for more serious competitions. He dedicated much time to the sport, proving his undying love for the game.

On the brighter side, his family was supportive when they discovered his interest and love for table tennis. They even purposed to nurture it, which greatly encouraged him to go for what he wanted and ensure that he excelled.

They ensured that he interacted with the right people who would sharpen his skill and intellectual ability for more excellent performance when it came to table tennis. Here is a glimpse of his profile: Moregard achieved his first international success in 2016. This also included the youth top 10 award. He won the European Student Champion twice and the European Youth Champion once.

Some of his notable successes were in the 2018 World cup and 2019 European Table Tennis Championships, when he took home bronze. He beat all odds and defeated Kristian Karlsson in the 2019 finals ending up being the Swedish champion.

He also emerged as the Swedish champion again in 2021, when he defeated Anton Kallberg in the final. This was one of the best performances he has ever put up. 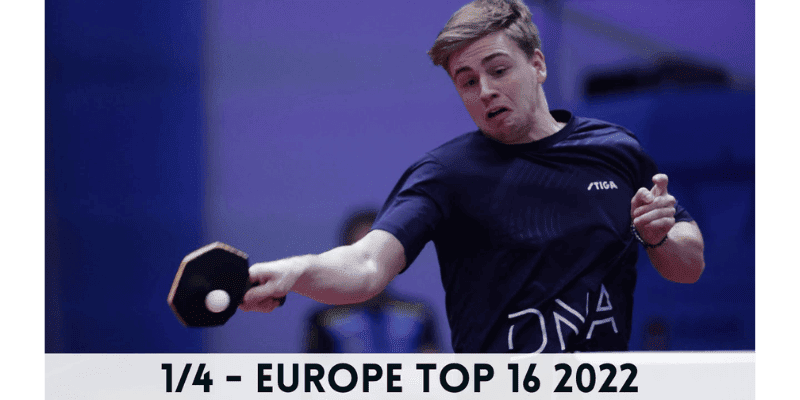 In 2018, Truls won the bronze medal at the World Championship and was twice the European youth champion. In 2019, he moves to the Japanese club TT Saitama where he continues to play much better.

He also has great success in mixed doubles. With Sabina Surjan, a Serbian female table tennis player, he reached the bronze medal again and was in the quarter-finals in an individual competition.

Truls is a right-handed player who uses the European shakehand style of play. He also incorporates a lot of attacking techniques in his play. He is so good at this skill that many people admire him. We can say that he has almost perfected it!

His fans also compare his playing style with Jan-Ove Waldner’s style, saying they are somewhat similar. For those who do not know Jan, he is a legendary former Swedish table tennis player who liked using backhand blocks and chops a lot in the same way Truls Moregard does. 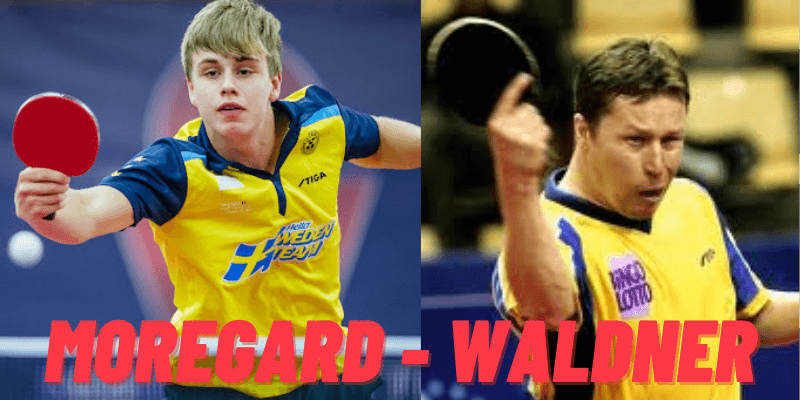 Waldner is also famous in China and is the only non-Asian athlete to win an Olympic table tennis gold medal. Maybe here is where most of Truls’ inspiration came from; you never know! They always say that you look up to the best to become the best, which is indeed true according to his case.

Truls is said to have a unique close-to-the-table playing style.

The Stiga Table Tennis brand currently sponsors Moregard. Stiga is known for manufacturing high-quality and world-class table tennis equipment such as rubbers, blades, tables, nets, and balls, among other equipment.

This confirms the kind of equipment that he uses for his shakehand. Stiga provides all his equipment (especially rubbers and blades).

He uses the Stiga Cybershape Blade master for his blade and DNA Platinum XH max rubber for both his forehand and backhand. Here is a quick review of the blade and rubber by Stiga: “I use STIGA Cybershape because I believe it is the shape for a future world Champion.”

Cybershape blade master is one of the best blades you can consider using in the Stiga series of blades. It is the fastest blade and is used mainly in offensive play. This makes it an excellent blade for attacking.

It has a protective design shape that gives it an optimum hitting surface. When you see a paddle with this blade, you will tell that it is unique because not many blades have such a shape, let alone the characteristics.

It even exceeds the performance of traditional blades! Thus it is worth every try and will give you good value for your money.

The optimal hitting area is at the top half of the blade. This is where the majority of the stroking/hitting is done. The surface is 11% larger for the shakehand grip (making it ideal for shakehand) and 9% larger for the Penhold grip compared to a traditional blade.

It contains the Close Core Fiber (CCF) technology of 5 + 2 plies. The surface contains 5 wood plies and 2 carbon layers on top of the wood core for a much better and tender feel, higher speed, and excellent control. The shape of the blade allows you to easily angle your paddle as you like and produce the right amount of spin when serving. The Stiga Cybershape carbon blade has a more linear frequency response than a traditional blade. This gives you a new and good feel during your play. The more the linearity, the more the vibrations are transported differently to the handle and finally to the hand. The larger hitting surface gives you a sweet spot that enhances control.

The blade is lightweight, another distinguishing factor; hence one can easily play with it. It is fit for players of any age but would work best for experienced players because of the high amount of speed. The hitting area is closer to the table during returns (approximately 6.5 cm) compared to 2.5cm for a rounded blade.

Cybershape carbon blade’s shape makes it easier for players to see the hitting area when serving. They need to choose any of the six corners according to the spin they want to be produced. It is an advanced table tennis rubber with a high level of spin and great speed. It possesses qualities that allow for strikes from any angle.

Stiga DNA Platinum XH contains a thinner top sheet that accommodates a thicker sponge of up to 2.3 mm, thus enhancing its speed and power. It has shorter pimples for greater surface control between the sponge and blade.

This rubber also has a Power Sponge Cell (PSC) technology that increases the catapult effect and optimal power that enables aggressive arc in loop play and a longer ball trajectory. It has a sponge hardness of 52.5 degrees meaning that it is lightweight and a very fast rubber.

You will not miss hearing that crisp sound while playing. The rubber is made in Germany and developed in collaboration with the Chinese national team. This assures you of high-quality equipment you won’t regret using during your play.

DNA Platinum is the latest addition to the Stiga DNA series. It is the best option for professional table tennis players who use an offensive style of play. Just like Truls, you can also heighten your skills using this rubber which will give you top-notch performance.

The sponge pores enhance the contact between the rubber and the blade. The extra hard sponge is for players who like the highest speed levels.

It is a natural and unique composition of synthetic rubber, thus durable and able to serve you for the longest while.

Truls Moregard is currently ranked number 3 according to ITTF Table Tennis World Ranking Men’s singles as of October 24, 2022. His δ ITTF rankings category from September to November 2022 is 6,3 and 5 places.

ITTF rankings from this year show that Truls is from May on the top 10 in the world. He played in the WTT cup finals this year in Xinxiang.

His highest rank ever is 3rd place as of October 24, 2022. He comes after Fan Zhendong (1st place) and Ma Long (2nd place) with 3115 points. Currently, Truls is 5th in the world table tennis ranking of November.

Since he was young, Truls has dedicated much time to his table tennis practice. During his training sessions, he puts in approximately 30 hours of hard effort each week. When he was 12 years old, his family decided to move to Eslov, a small town in Sweden, to allow him to pursue his table tennis career. He is still currently based here.

He started playing for the Eslövs AI BTK table tennis club, which is based in Eslov, as soon as they relocated there. It is quite a notable club because it has won the Swedish championship 13 times in the last 15 years. 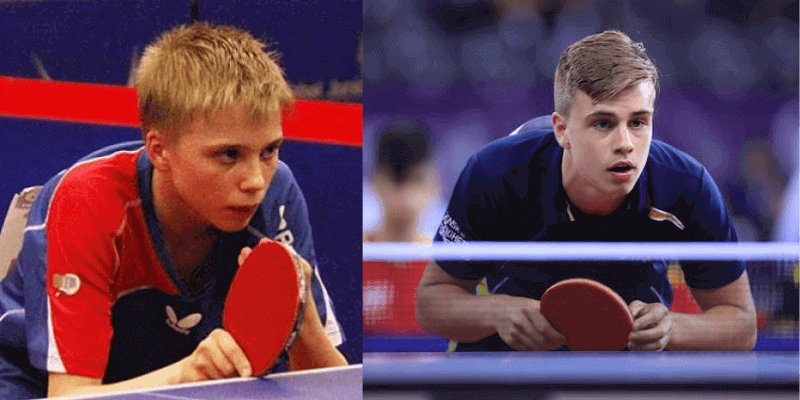 The club reached the final of the European Champions League – the premier continental European competition – in 2015/2016.

Technically, his dad was his coach as he was starting. He ensured that his interest in table tennis increased by giving him new challenges daily and allowing him to train in many different groups.

When he moved to Eslov, Peter Sartz (Denmark’s national coach and sports director) and Peter Andersson trained him too. Soon after, he started training with renowned table tennis players like Xu Hui – a Chinese Professional Table tennis player.

He also occasionally received guidance from Hu Weixin, a world-class table tennis coach who lives in Sweden. Hu Weixin’s input was so massive to Truls that it helped him improve his game drastically.

Some of Moregard’s role models are Jan-Ove Waldner (famously known as “the Mozart of table tennis”) and Jorgen Person. These former professional Swedish table tennis players performed incredibly during their active times.

He also looks up to Timo Boll. Truls says that the thought of him being the next Waldner, as many people say, is both cozy and attractive. He is very much willing to work towards achieving that and even becoming their best version.

From Truls’ early life and table tennis career life, we can say that hard work is the key to all success.

Truls Moregard has immense achievements because of his commitment and passion for table tennis sport. He has placed his nation at the topmost rank, and they have so much hope for him in the future.

Truls Moregard is a Swedish table tennis player who has had great success recently. In the world table tennis championships, he gains the most progress of all European players. WATCH HIS GAMES AT THE WTT MACAO!

In 2018, he won the silver medal at the WTT champions Macao and was also the junior vice World champion. In addition, he has competed in the Swedish national team for years and is considered one of the best players in the world.

Moregard’s skills were evident when he won the European youth championships, and he has only improved since then. With his dedication to the sport and natural talent, there is no doubt that Moregard will be a force to be reckoned with in the years to come.