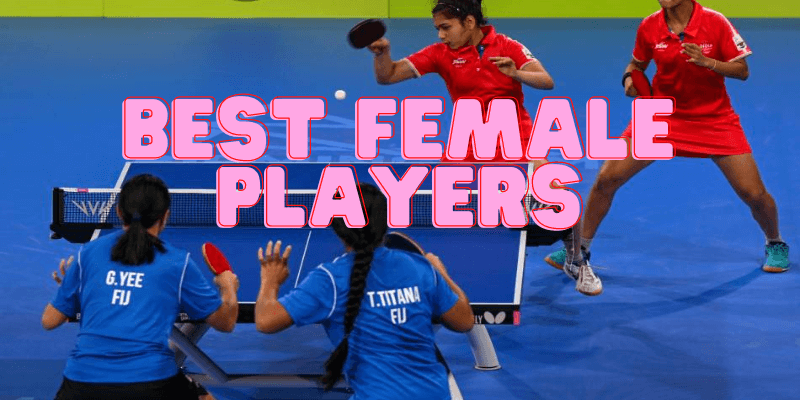 Here is a list of the top 10 best female table tennis players ever in history that you need to know about.

There are many exceptional female table tennis players all over the world. China and Japan are well-known for producing great professional players in table tennis sport. This article will show some of these female players and their achievements over the years.

The below list is based on their achievements, performance, and rankings: 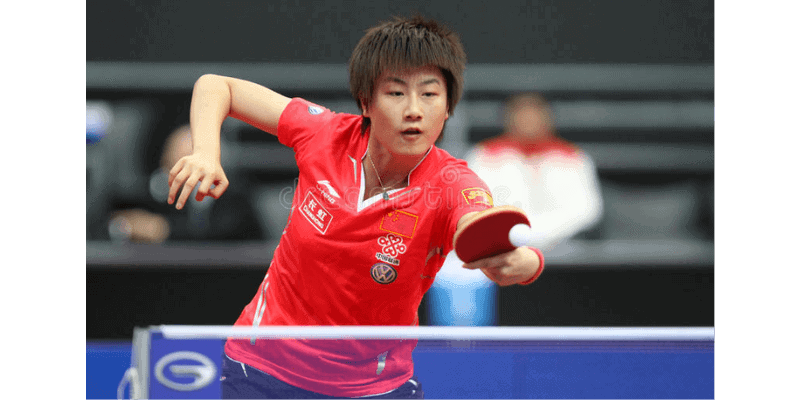 Ding Ning was born on June 20, 1990, in Daqing, Heilongjiang, China. She is a left-handed table tennis player, and her shakehand grip and skills are excellent. You can’t even imagine.

Some of her greatest achievements are winning the 2011 World Table Tennis Championship in the women’s singles.

The second title came in the 2015 World Table Tennis Championships, and the third at the 2017 WTTC in Dusseldorf. She has also won several single titles in the Summer Olympics.

Ding Ning is a Chinese table tennis player seen as one of the most successful and influential female table tennis players in the history of China. She is currently retired(she retired in September 2021) and is pursuing a Master’s degree in Physical Education at Peking University, Beijing, China. Liu Shiwen was born on April 12, 1991. She is the greatest female table tennis and a legendary player because she has won the World Cup 5 times, World Championships once, and ITTF World Tour grand finals 3 times. She is one of the world’s quickest table tennis players because she is very swift while playing.

One of the best female table tennis players ever won the pro tour eight times and the pro tour grand final three times. She also won the Asian cup in 2010, 2012, and 2013.

Liu Shiwen, however, was not active in 2020 because of the covid-19 pandemic, which affected many people in one way or another. She was also suffering from a serious elbow injury that year that made her undergo surgery.

Her favorite equipment is a Butterfly Liu Shiwen ping pong blade, black-colored Tibhar Grip S for the forehand, and red-colored Butterfly Tenergy 05 rubber for the backhand. She is also known as Nan Nan or Nan Jie. Wang Nan was born on October 23, 1978, in Liaoning, China. She held the number one rank on the ITTF ranking system from January 1999 to November 2002.

Wang Nan is left-handed and is known for her swift change regarding ball placement during rallies, loops, drives, and great speed. Her playing style is the shakehand grip. Wang Nan was the leader of the ladies’ Chinese table tennis team after the retirement of Deng Yaping.

Her notable achievements include winning at least one gold medal in each table tennis World Cup, World Championship, and Olympic Games. She won the women’s World table tennis cup twice, in 1997 and 1998, and the American Opens and China Opens.

Wang Nan represented China for the 4th time at the 2003 World Table Tennis Championships in Paris, where she won 3 gold medals in singles, doubles, and mixed doubles.

This was the third consecutive time she won both singles and doubles, setting a high record and proving that she is still one of the world’s greatest female table tennis and top players.

In the 1998 Asian games in Bangkok, she won 4 gold medals in the singles, doubles, mixed doubles, and women’s teams. Li Xiaoxia is popularly known by her nickname “Sunny.” She was born on January 16, 1988. She managed to get the topmost rank for the first time in the ITTF in April 2011.

Li Xiaoxia became the world champion in team events twice, in 2006 and 2008. She also became the Asian Champion in the mixed doubles event in 2009. Ai Fukuhara – November 1, 1988, was born in Sendai, Miyagi, Japan. She is a right-handed player who uses a shakehand playing style.

She became the youngest player to be part of the Japanese National Team at 11. Ai was also the youngest Japanese representative ever for the Asian Games in 2002 at the age of 13.

Ai is one of the greatest female table tennis players and began her world championship journey in Paris in 2004, where she helped the country win bronze.

She then qualified for the 2004 Summer Olympics in the Asian zone qualifying tournament. This title enabled her to compete in Athens at the age of 15, where she was termed the youngest-ever female table tennis player to debut in the Olympic Games. Kasumi Ishikawa is one of the most renowned Japanese top Table Tennis players of all time. She was born on February 23, 1993.

Born in a family of professional table tennis players, she first came into the limelight when she won her first-ever All-Japan Table Tennis Championships. She defeated many high school and campus students at a very young age.

She upheld the winning spirit and won four consecutive years in the same championship, which set her at the top bar.

Kasumi Ishikawa currently ranks 9th position according to International Table Tennis Federation (ITTF) rankings as of 2022. Some of her nicknames include Ai-Chan, resulting from people thinking that she resembles Ai Fukuhara’s personality and character traits regarding table tennis.

She is known for her fast top spins and continuous loops in her offensive play. Her favorite blade is Clipper CR WRB, and her rubbers are Nittaku FastArc G-1 for the forehand and Butterfly Tenergy 64 for the backhand. Chen Meng was born on January 15, 1994. She is currently ranked 2nd according to the ITTF ranking list. She achieved her career-high ranking of world number one in January 2018.

Chen plays for a Chinese club called Shandong Luneng, and some of her remarkable achievements include winning ITTF World Tour twice until present in the Swedish Opens and China Opens in 2013. Ito Mima is one of the youngest and strongest Japanese table tennis players. Mima was born on October 21, 2000. Her career journey began when she was 15 and won a bronze medal in the women’s team event at the 2016 Summer Olympics.

In march 2020, at the Qatar Opens, she won against Olympic Champion Ding Ning in the semi-finals. She attained an 11-0 score in the third set, making it the first time a non-Chinese player won against a Chinese player.

One of the greatest female table tennis players is known for her unique playing style, including short pips on the backhand, great serves, and fast flat smashes of the forehand. Zhu Yuling was born on January 10, 1995. She proficiently uses a shakehand on her right hand. She won the World Junior Table Tennis Championships in the girl’s singles twice and became the semi-finalist at the 2013 WTTC.

Zhu Yuling also emerged at the highest rank in 2017 after winning against Liu Shiwen at the ITTF women’s World Cup in Markham, Ontario.

She was a reserve player at the 2016 Summer Olympics in Rio. Yuling was also selected for the Chinese national team at the age of only 15 years.

When growing up, she dedicated a lot of her time practicing (approximately 9 hours a day) alongside her studies. This is a result of her overall good performance in the game.

Sun Yingsha is a rising star in the table tennis industry. At 22 years old, this professional Chinese table tennis player has numerous achievements. She was born on November 4, 2000. She is currently the world’s number one in women’s singles.

Sun Yingsha has defeated legendary table tennis players like Mima Ito, Ding Ning, Chen Meng, and Liu Shiwen. When she defeated Mima Ito in the 2019 World Team Cup finals, she was ranked the second-best in the globe in 2020.

One of the best female table tennis players ever collaborated with Cheng Meng and Wang Manyu in the women’s team event finals in 2021, which made China win 3-0 against Japan, taking home Gold and setting the perfect record in the event. This also helped her attain her current title.

If she continues this trend, she will be the leader of the best female table tennis players in the future. From all the achievements highlighted, we can agree that these female table tennis players are among the best and the greatest ever!

Ding Ning is currently the best female table tennis player in the world, according to the International Table Tennis Federation (ITTF). She has won a gold medal at the World Championship and numerous other titles.

If you want to learn more about her or watch some of her amazing plays, be sure to check out her website or YouTube channel.

Now that you know about the best female table tennis players, we hope you find enough information about your favorite player and get inspired to start playing this amazing sport.

Who knows? You may have become so motivated by reading this article that you will be the next champion. Let us know how it goes!