In this post, we decided to present you with the most important table tennis rules as short and understandable to not sound like a boring list of rules.

Do you want to play table tennis for fun, or are you still interested in specific rules in matches?

Several rules have changed over a period of time, so it is essential to know which ones apply today. If you live in or near Salt Lake City, you can learn the rules in practice at this beautiful Table Tennis Club – SLCTT.

Previously, people played table tennis up to 21 points, and you had to win 2 sets to win the match. Players served 5 serves alternately. Different table tennis rules apply now, so take a look below.

Sets are played up to 11 points. In case of a tie break (that is if the result is 10:10), the game doesn’t stop until one player wins two points in a row. With a score of 10:10, players serve in a way one serves each.

There are several options for when the ball hits the edge of the table.

When you hit the opponent’s edge of the table with the ball, then your point is not in every situation.

An important dilemma about the edge of the table 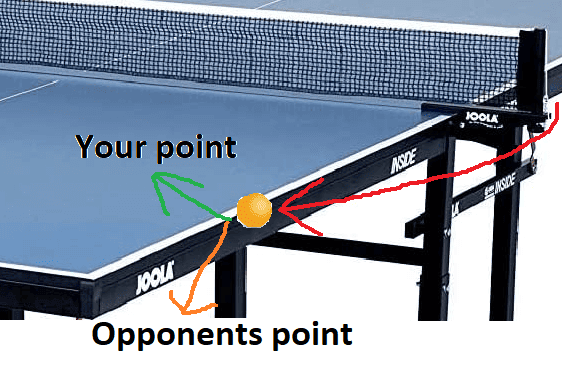 If the ball goes to the side or next to the net (the ball doesn’t go over the net) and hits the edge of the opponent’s table, you might lose the point because the ball’s bounce is the most important in this situation.

If the ball cracks at the contact with your paddle, the point is continuously repeated. This rule did not exist before, so you should know that this is a novelty in table tennis.

Earlier, it was calculated when the ball broke that the point was lost. And today, due to fair play, it was introduced to repeat the point because no one knows if the opponent could have returned the ball to the table if it hadn’t cracked.

Hitting the ball with fingers or handle

If you return the ball successfully with the handle (instead of the rubber) or with a finger on your paddle-holding hand, and the opponent misses, it still counts as your point. In the past, this was not the case.

Returning the ball with anything but the rubber was considered a lost point. Here is important to say that only a handful and fingers come into consideration. Other parts of the hand do not count.

Touching the table with your hand

If you touch the table tennis table with your hand, the one with which you do not hold the racket, the point will be automatically awarded to the opponent. This does not mean that you hang a table when fighting for a point and moving.

It is important that you do not use your hand as support. Also, moving the table counts as the opponent’s point.

In service, if the ball touches the net and passes to the opponent’s side of the table, then let is counted. It should only be noted here that you can serve let an unlimited number of times without losing a point in ping pong, unlike tennis. You will only repeat the service each time.

The rules in doubles are not particularly complicated. You need to pay some attention if you are a beginner, and you will quickly get used to it.

When playing doubles, there are only two differences concerning individual matches. The service must go from the forehand diagonal to the opponent’s forehand diagonal, including playing with your right hand. If you are left-handed, then that means you are serving from your backhand. 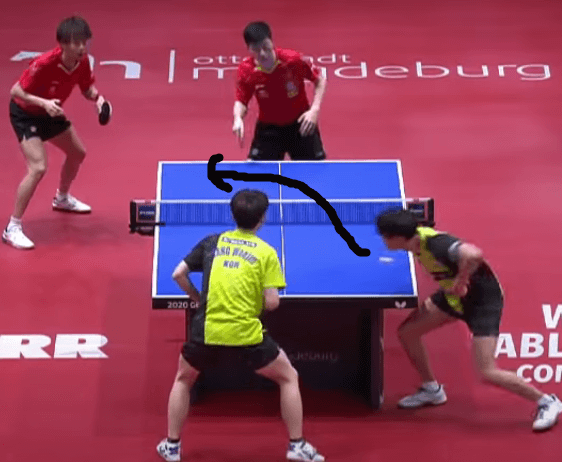 Unlike tennis, where one player can hit the ball several times in a row, the rules are different in table tennis.

Each player must alternate hitting the ball and then move so that the other player can make his move. Thus, the players move more to make room for their double partner for each next ball.

The rubbers on your ping pong paddle should be one red and the other black. The ball should be 40mm in diameter.

The ping pong table dimension is primarily standard, but we will say those who do not know. Length should be 2.74m, width 1.525, and the table height o.76m.

Also, the net has dimensions that players should respect according to the rules of table tennis. The height is 15.25 cm and extends along the center of the table’s width and thus divides the table tennis table into two equal parts. 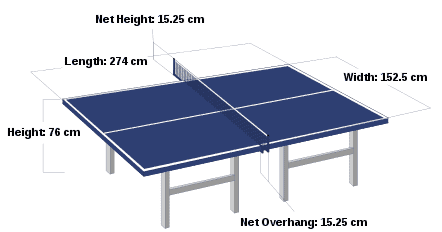 Beginning of the match

The first rule before the game starts is to determine who has the first serve, and a coin toss achieves this by the referee. The player who wins the coin toss gets to pick between serving first or a specific side of the table.

The other player then gets to either serve first or choose their first side.

For friendly matches, to determine who serves first, one player can hide the ball in one hand under the table, and the other guesses which hand it’s in.

According to Official ITTF rules, table tennis players must perform service with an open hand, and the ball should be thrown upright at least 16 cm.

Additionally, the opponent needs to have a clear view of the paddle during its contact with the ball, so the server cannot hide the serve with their body or another hand. This, of course, also applies to doubles.

When serving, the player must hit his part of the table with the ball first, then let it bounce on the part of the opponent’s table without touching the net.

If the ball touches the net and then moves to the opponent’s part of the table, then the player repeats the service. We call this a “let.” Otherwise, unlike in tennis, in table tennis, you can do an unlimited number of “lets.” This will mean that you can repeat the service unlimited times.

Types of points during the game

I will share the latest two rules with you.

Firstly, if you hit the ball and at that moment it breaks, then the point is repeated, regardless of whether you returned it to the opponent’s part of the table or you made a mistake.

Secondly, if at the same time, when hitting the ball, it catches a finger or a piece of ping pong paddle, and you manage to hit, and then the opponent makes a mistake, that will be your point.

Earlier, table tennis rules counted this thing as (double), and a point was awarded to the opponent. But according to the latest rules, it no longer exists. Of course, this does not happen often, but to know how it is a rule.

Table Tennis Rules that have changed

Serve rules have also changed. In 2003, ITTF adopted rules to remove the non-racquet-holding hand to unblock the opponent from seeing the entire wrist movement. Before that, players could “hide” the serve by covering the racquet-holding hand during the ball’s contact.

You must throw the ball straight up a minimum of 16cm with an open hand.

With these two rules, a lot has changed in general in most players’ games. Somehow, table tennis achieved a greater fair play because the players who had excellent serves and who managed to hide the service had a huge advantage even though they were equal to their opponents.

We talked about the standard rules of table tennis. Look at what is more important to me than victory or defeat – good sportsmanship in table tennis. These are 7 important unwritten rules that every table tennis player should follow:

1.If you notice an umpire’s mistake, then react. Sometimes it will happen that the umpire will award a point in your favor, and you know that it was not true. Then react, acknowledge the point to the opponent.

Believe me, and it will come back to you when you at least expect it. Even if it doesn’t come back, you will show that you are a fair play player who doesn’t care about winning at any cost.

2.Shake hands with your opponent after every match. No matter what the outcome was and how the opponent behaved, you show that you are a man and an athlete appreciating the opponent.

There are examples of famous players who did not want to lend a hand to the opponent. So, that only shows an unsportsmanlike move. As much as defeat hurts sometimes, you have to be above it and realize that it is a sport and not a war playground.

3.Do not applaud or rejoice when your opponent misses a serve. It is not cultural or moral. Of course, some players do it, and the audience sometimes knows how to be like that. However, that shows rudeness, and my advice is not to be like that. Continue to play usually and fight for the next point. 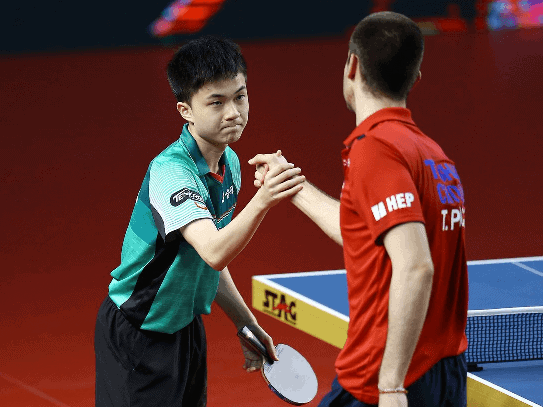 5.Do not turn on the flash on your phone. As a player, I can tell you that it was a terrible experience. When you concentrate on the ball and an important point, believe me, the flash on the phone bothers you as much as you are a good player.

Therefore, could you not do it to others? Let everyone show how much they know at the table without any additional distractions from the audience.

6.If the ball accidentally gets wet, make sure to wipe it before serving. Some players intentionally throw in a wet ball during the service and thus get the point.

Believe me, it is a short-term point, and you will only show your unsportsmanlike spirit. If the opponent is better in the game, he will win. Otherwise, you will win, but a wet ball is certainly not a way to deceive him.

7.If you are at a tournament and the ball from your table enters the field of other players, make sure to raise your hand and say “stop” to break the point. If you don’t do that, it may happen that some of them will be bothered by the ball that entered the place they play, and someone will get the point in an unsportsmanlike way.

So be fair and report that your ball has passed to them. It will sometimes happen that you will be bothered by their ball and also one of them will warn you.

1. Why do players touch the table while playing?

It is a simple physical reaction in the fight for a point. It usually happens when the ball is close to the net. Then reflexively, while trying to return the ball with the racket, the player might touch the table with the other hand.

This is illegal in table tennis. While players are allowed to hook the table with a racket during the game, touching the table with the non-paddle-holding hand loses you the point.

2. What happens when a player, an opponent serves illegally?

If the umpire is present, then he will decide if the service is really incorrect. If he can’t decide, then there should be fair play between the players.

3. Whose point is it if the ball catches the net during the service and does not hit the opponent’s part of the table?

Then the opponent’s point. So, the player who served, and if the ball hit the net and did not fall on your part of the table, then it is your point.