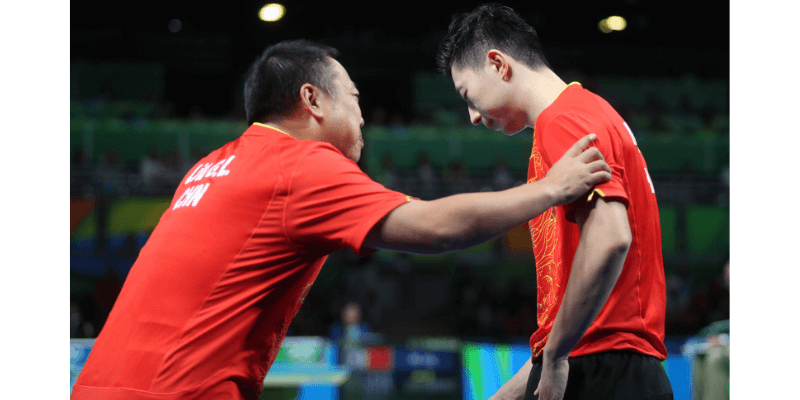 Ma Long is the Greatest Table Tennis Player of All Time, not only in China but in the World. He is also the current Olympic singles champion. He was born on October 20, 1988.

Ma Long is the only male player to complete a career Double Grand Slam as the Olympic gold medalist in men’s singles in 2016 and 2020. These are just some of his many achievements. More of them will be covered in the course of this article.

Today, this article brings you an overview of the life of Ma Long. We will be able to see where his passion for table tennis came from and what he has been doing to improve daily.

We will also see his successes and other prominent table tennis players he has managed to defeat in the history of table tennis. He has set several records that not many have managed to break. You will get to see these records too. Ma long’s exemplary performances have made the International Table Tennis Federation (ITTF) compose a nickname for him, “the Dictator” or “the Dragon.” He earned these nicknames because, as some said, he dictates how matches play out and rules with an iron fist! It’s like in every game he plays, and he makes sure he owns it.

Now, let us begin by looking at his early life.

Ma has been playing table tennis since the age of 5. Whether you believe it or not, he did not have any interest in the sport as he started. He only played because his parents wanted him to improve his strength and fitness.

His interest in table tennis started growing slowly until it developed at 9. He had gained immense confidence and knowledge in the sport, and one could tell his love for the game once you saw him play.

He used to play most of the time in his hometown – Anshan. He always aimed at becoming the champion.

His success journey began in 1995 when he won the singles championship in primary and secondary school tournaments.

In 1999, he joined the Liaoning Provisional Sports School to focus more on bettering his skill. After two years, he joined the Xiannongtan Sports School after Guan Arhua, a coach from the Beijing team, noticed his talent and capabilities. He saw great potential in him and took him in because he felt he would be an asset the team could rely on.

Ma long’s success journey began at a very young age. In 2003 and 2004, he won six gold and five silver medals at the Asian Junior Championships and World Junior Championships. He became the youngest World Champion when he won the 2006 World Team Championship in Bremen at the age of only 17 years. The same year, he won gold in Hong Kong in the World Tour Grand final. He first won the World Cup in the team events in 2009 Linz. Here, he managed to defeat great players like Joo Saehyuk, Ryu Seungmin, and Oh Sangeun.

Ma Long has ranked first according to the ITTF ranking for 64 months, with 34 consecutive from March 2015. He broke a record because no other player has stayed in the topmost rank for this long.

At the tender age of 29, MaLong has already accomplished more than most players could ever dream of achieving in their careers. A five-time World Champion, Olympic gold medallist, and winner of every other major title in the World of table tennis, he is widely regarded as the best player to have ever graced the sport.

Entering the Tokyo Olympics as the top seed, Ma Long was the favorite to take home the gold medal. And he did not disappoint. He breezed through the early rounds without dropping a single set before coming up against Fan Zhendong in an epic final.

The match was a thrilling see-saw battle, with both players showing why they are considered the two best players in the World. In the end, Ma Long emerged victorious, winning 3-2 to claim his second Olympic gold medal.

Ma beat all odds and became the first male athlete to defend an Olympic title in his latest Olympic competition in Tokyo. He defeated Fan Zhendong, scoring 4-2 in the finals.

Ma Long is a right-handed table tennis player who uses a shakehand grip. He is known to be a lethal attacker who does not spare any of his opponents. His most significant source of strength is his powerful forehand. Long generates fantastic loops using his forehand. His backhand is also good, but not as good as the forehand. Ma Long’s other favorite playing style is the chop blocks he uses occasionally. It pairs well with his forehand. His consistency and accuracy are at 95%. This is better than any other table tennis player you can think of.

His serves are also good. In one of the World Tour games, it was said he had the best setup serve ever, which boosts his forehand skill.

Ma is very fit and can swiftly and professionally move about around the table during his play. His footwork is wonderful, and he has a good balance. All these contribute to his high-level performance in his various competitions.

Long’s net worth is estimated to be $ 20 million. His wealth has accumulated from his numerous wins, from which he has received huge rewards.

His net worth is higher than many players, considering he is one of the best table tennis players in China and the World in general.

Long’s highest ranking is in the first position. He held this title for 64 months, with 34 months being consecutive. He broke the record in the history of table tennis because no player has ever stayed in this rank for such a long time.

However, he currently ranks second after Fan Zhendong with 4400 points. This rank is according to the ITTF ranking as of November 2022. Their points are different; he might claim his position again soon.

Long’s greatest rival is Fan Zhendong. Fan currently ranks first according to the ITTF ranking, and Ma follows him closely. They have competed for head-on on 34 occasions, with Ma emerging as the winner in 22 competitions while Fan won in 12.

From 2019 onwards, Fan emerged as the winner withfour4 wins and Ma Long with 2. Fan started outdoing Long in recent competitions (from 2019 onwards).

Also, looking at their achievements, Ma Long has more accomplishments than Fan. In terms of gold medals, he has 26 in the World Cup, Olympics, and World Championship games, among other small tournaments, whereas Fan, has just 12.

In the ITTF World Cup finals on November 15, 2020, Fan defeated Long 4-3. They also met in the ITTF World Tour Grand Finals the following week, and Long got even with him. Fan also won over Long in the World Tour in 2016 China Opens. 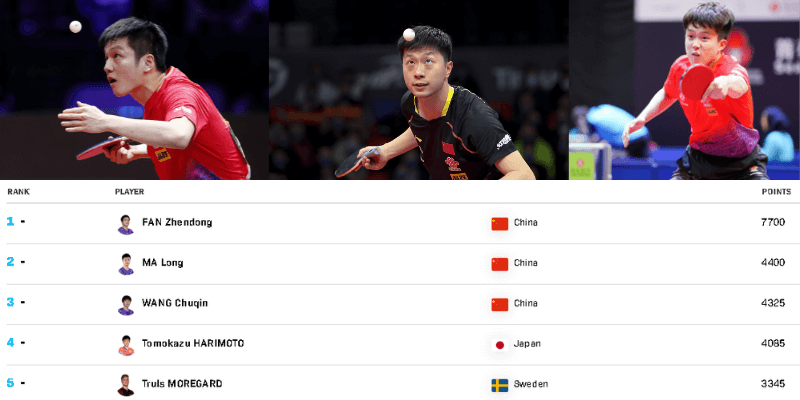 Fan Zhendong has been a fierce opponent to his rival Ma, but overall, we can say that Ma is much stronger than Fan. He possesses better tactic variation, skill, and knowledge of the game and has been playing table tennis for a long while. Fan, however, is also a world-class player. He is swift and discreet.

Ma Long loves STIGA equipment. He is seen using them primarily in his games. His blade is the DHS W968 or the Hurricane Long 5, which costs $ 170. His rubbers are not available to the public and are designed according to his physical strengths. Their sponges are much harder. The top sheet is different than the commercial rubber available in the market.

The top sheet of the forehand rubber is more elastic and consistent. The pimple structure is also denser and smaller than the commercial one. Thus, the top sheet can produce Ma Long’s maximum spin in his shots.

Before he started using STIGA equipment, he experimented with Japanese rubbers from Butterfly. He used Tenergy 05 professional version as his backhand rubber. He preferred this rubber because it is much faster and more complex. It was custom-made, specifically for him, with a 39-40 ESN scale hardness.

After some time, he changed to custom Hurricane rubbers. This happened in 2017. The red side of the rubber was for the backhand. He had discovered that Japanese rubbers were not hard as the Hurricane series.

Many Chinese table tennis players love more direct-feeling rubbers, which are hard rubbers on their backhands.

Ma Long has been experimenting with different blades over the years to find that which meets his gaming needs. Here are the blades that he has ever used and the periods he used them:

READ OUR FULL REVIEWS for:

Hurricane Long 5 is his current blade. It helps him play at a low angle, the posture that suits his playing style. These are some of its characteristics: Five5 wooden + 2 Arylate carbon.

The blade is currently available on AMAZON!

Its composition is similar to Viscaria but much faster than Viscaria.

Hurricane long 5 is the current representative of all World Champion blades from all table tennis makers. Hurricane Long 5x is similar to Hurricane Long 5, only that it is an upgrade. It is a much faster version, and the added “x” means the blade whose elasticity has been enhanced by thicker plywood construction. The plywood construction includes Limba on the outer surface and Ayous at the center. This blade has a thickness of 6.0 mm, unlike the original version, which has a thickness of 5.6mm. The distance between the two fiber layers matters more than the overall thickness.

It also has a higher elasticity than the original version. Hurricane Long 5x provides moderately increased speed and holds the ball very deep when the player hits it very hard. This feature encourages continuous topspins.

It is an overall hard blade, just as Ma Long likes it.

You can now tell the secret to Ma Long’s high performance. Good quality equipment ensures top performance. A good example is the blades and rubbers that he uses. He identified his needs and knew what ideal equipment should contain.

He was also brave enough to discover a talent he didn’t know he had when he was young through the help of his parents. Ma Long has been an inspirational force to many young and upcoming table tennis players worldwide. Through his life story, we are constantly urged to aim higher and aspire to be the best version of ourselves in everything we do.

Ma Long is the best table tennis player in the World. He has been World Champion on three occasions, and his victory at the singles event at the Rio 2016 Olympic Games means he is the current World and Olympic champion.

His skills are undeniable, but his passion for the sport makes him stand out from other players. This drive to be the best is evident in all that he does, making him an inspiration to table tennis players everywhere.

So far, no one has been able to dethrone him – will you be next?