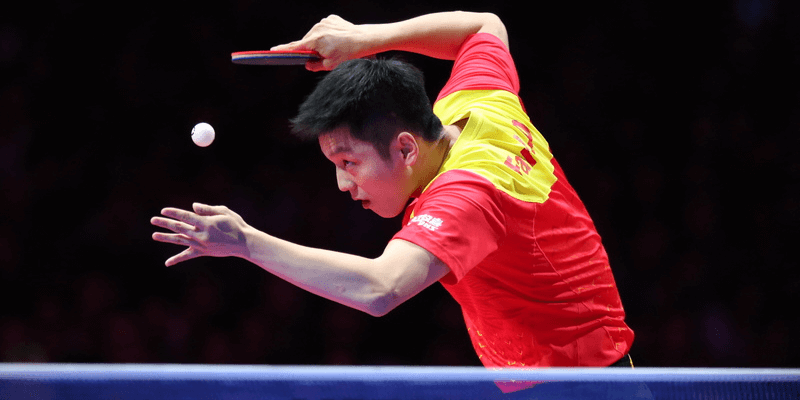 Fan Zhendong is a world-class table tennis player. He is currently ranked number 1 in the singles men’s division by the ITTF (International Table Tennis Federation).

Some may even consider Fan Zhendong a better player than Ma Long (One of the all-time greats in the sport) because of his superior techniques combined with the powerful backhand and forehand strikes.

He got much of his inspiration from his favorite player Rafael Nadal. He became the youngest ITTF and World Table Tennis Champion in the history of table tennis.

Fan Zhendong got into table tennis when he was only 5 years old. His parents motivated him to pick up the sport, but at that time, his family didn’t realize that he would grow up to be a world-class player. Fan Zhendong won his first tournament when he was 7.

He participated in the Guangzhou City Men’s table tennis tournament and got first place. Fan Zhendong got a lot of attention when he won the big match. He quickly built up a considerable fan base. Seeing his immense talent, his parents sent him to a special sports academy to further master his skills.

As he got older, he competed in more and more competitions. When he turned 11, he got the attention of influential figures in the table tennis industry. He quickly joined an elite table tennis team called the Eight Table Tennis team, which featured world-renowned figures like Lui Guoliang and Wang Hao.

He joined the Chinese National B team and won the tournament in Tongzhou. Fan saw how successful and talented the National A team was, which motivated him to work even harder.

Eventually, his hard work paid off as he joined the Chinese A team. That year Fan was victorious in 3 singles, mix, and team events.

The Stiga table tennis company sponsors Fan Zhendong. He used to play with a Viscaria blade, then switched to Stiga Infinity VPS V.

The Infinity VPS V – with Diamond Touch is the ideal blade for aggressive modern play. Two center veneers that are crafted are the foundation of the new Infinity VPS technology (Veneer Precision System), which is constructed using a precise and one-of-a-kind heating and cooling procedure.

The result is a lightweight, aggressive blade with exceptional solid experience. He uses a Hurricane 3 National Blue sponge for forehand plays and Butterfly Tenergy 05 ping pong rubber for backhand.

The Tenergy 05 is suitable for both Chinese and European styles. During the 2019 World Table Tennis matches, he used the brand-new Buttery Dignics 05, which had just been released on April 1. The arylate-Carbon hybrid string is a flexible weapon of war. Equipped with Arylate-Carbon, the flexibility and ease of use provide an excellent balance between offensive and defensive play.

Fan Zhendong chooses Butterfly Viscaria in the final big competition because it best fits his style of play (attack and counterattack at two sides close-to-mid-distance). 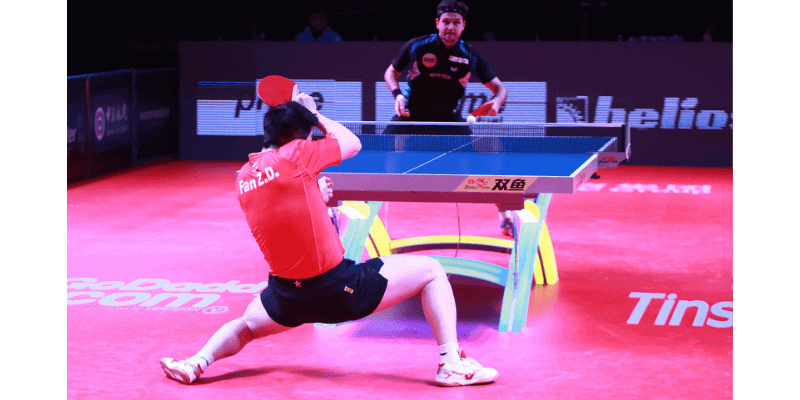 The Ma-Fan duo and Ma Long are the most well-known table tennis players. Ma Long has a lower chance of winning than Fan Zhendong. The likelihood of Fan Zhendong winning is roughly 56%. Fan Zhendong currently has 6900 points in June 2022, two times more than Ma Long, which has just 3400 points.

Sadly, Fan’s dreams of winning the 2015 World Championships were crushed as he fell to Ma Long, 4-1, in the semifinal match. Being 18 years old and competing against a more experienced, recognized player, it is understandable that Fan experienced some self-doubt during the game. 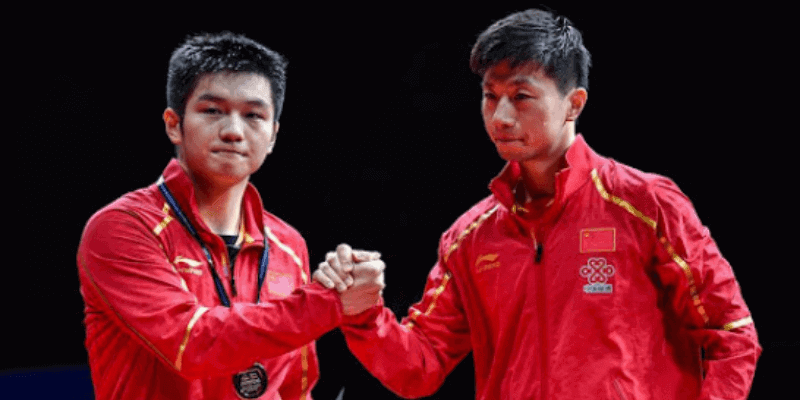 He lost to Ma Long again in the 2017 championship, but it was a close game this time. Fan lost 4-3, and the game ended at 12-10. He had significantly improved his skill since he last faced off against Ma Long in 2015.

Currently, Ma Long and Fan Zhendong face each other 28 times. Ma Long won 21 of that encounter, and Fan won 7. But their last two encounters in 2019 were very close games. Both men drew 4-4. But, now Fan Zhendong is on an equal skill level with Ma Long, although Fan is much younger.

After spending 29 months as the world’s #2 table tennis player, Fan eventually rose to the top of the rankings, fulfilling a lifelong dream. Despite his enormous success, Fan knew he couldn’t get cocky.

He understood that players would pursue him more aggressively than ever because of his top rating, making him a big target. Fan Zhendong feels a greater sense of stress and obligation, and he knows that to keep his position, he will need to harness all his technical skills and mental fortitude.

How Fan Spends His Downtime

Fan spends his off time with his table tennis teammates. They go out for meals and fun activities to release the pressure of performing at a high level.

He also loves playing video games during his break time. Clash of Clans is his favorite game. Fan Zhendong once said in an interview that his life isn’t that exciting because he primarily focuses on training activities.

He works harder than everyone else, which is why he is at the top of the ranking. Fan Zhendong wants to inspire the next generation to pick up the sport and make a name for themselves and their country.

Looking Back on His Early Days

Fan Zhendong has played table tennis for over 20 years and has had many opportunities to play worldwide. A few years ago, he injured his hand and could not play competitively.

When Fan was a child, he couldn’t imagine that table tennis would become an essential part of his life. Now that he is older and looks back on the years from childhood until now, he can see how important table tennis became for him as an adult. 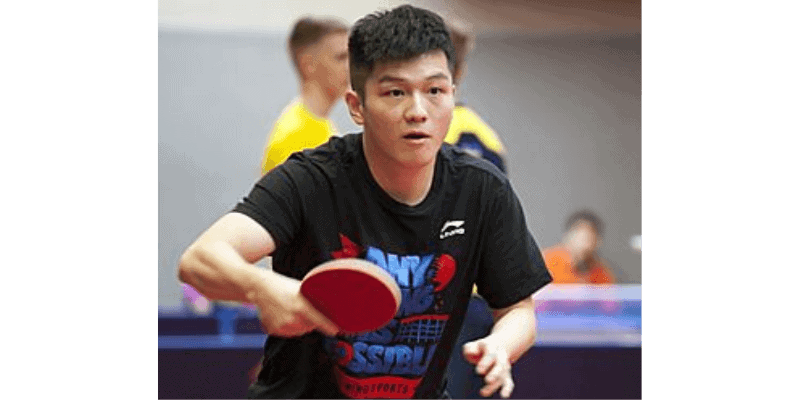 Playing table tennis now feels very different from when he was a child. As a child, it was pure enjoyment for Fan – he enjoyed playing with his friends and seeing how far he could get against them in fun matches without much pressure.

Fan Zhendong has achieved so much at a young age. He has made many world records and has several title victories to his name. He was their youngest player when he joined the Chinese national team in 2012.

Fan would become the youngest singles champion, ITTF champion, and world champion in his time. But these records were later smashed by Tomokazu Harimoto.

Fan Zhendong’s most notable achievement is being ranked number one worldwide. He reached the world’s top in 2018, but he had to fight to retain it with all his heart. But unfortunately, he lost the top position after seven months of reign. But he quickly rose to the top again. He has been the leading player in table tennis for 30 months, running as of September 2021. Only Ma Long, who spent 34 months at the top, had a longer tenure.

Here are some of the major title wins Fan Zhendong:

As of June 2019, he is ranked number one in the world by the International Table Tennis Federation world rankings. He has been ranked number one for 31 months, more than any male table tennis player in history. In addition to his impressive career ranking, Fan Zhendong has also amassed a considerable fortune through prize money and sponsorships.

As the top-ranked table tennis player in the world, Fan Zhendong commands a high price for appearances and endorsements. He is estimated to earn approximately a net worth of $5 million per year from sponsorships alone. In addition to his endorsement deals, Fan Zhendong also collects hefty sums of prize money for his tournament wins. For example, he won the men’s single world tournament in Kazakhstan in 2018, receiving prize money of $1,670,00. In total, it is estimated that Fan Zhendong has earned over $10 million in prize money during his career.

In addition to his on-court success, Fan Zhendong has also used his platform to become an influential figure off the court. He is a member of the international Olympic committee and an ambassador for the 2022 Winter Olympics in Beijing.

He has also been active in promoting table tennis as a sport and has helped to grow its popularity worldwide. Thanks to his success on and off the court, Fan Zhendong is considered one of history’s top table tennis players.

What The Future Holds for Fan Zhendong

At the 2020 Summer Olympics in Tokyo, Fan came close to winning the gold. It will be difficult for Fan to win the prized gold medal while Ma Long is still in the equation. Based on his recent results, Fan has a good chance of defeating any other singles player in the world, including Xu Xin. With Ma, however, anything is possible.

Now aged 32, Ma Long is inching closer to his retirement. The Chinese team is always keen on signing new fresh talents. Fan Zhendong would be the dominant player in table tennis without Ma Long.

Fan Zhendong was unfortunate to learn that Ma Long recently addressed retirement rumors in an online article. He discussed his achievements and setbacks but ultimately quashed any retirement rumors.

He will continue to compete for many years, and given his talent, he might still be around for the 2024 Summer Olympics in Paris.

Fan Zhendong is an excellent player with great skills. He has taken the training and playing techniques of national team coach Wang Hao and Ma Lin, which makes him unstoppable when he starts his game.

Furthermore, his boldness and skills enable him to win against highly qualified, skilled, and sometimes exhilarating players.

Secondly, the “Star Point of the Year” was a well-deserved accolade for both Xu Xin and Fan Zhendong, who produced some memorable points during their encounters in 2019. They got the male star award for that tournament.

Consequently, Fan Zhendong is a world-class table tennis player that everyone should watch out for in the upcoming tournaments. Everybody can learn to practice from his explosive footwork and unbelievable topspins.