Today we get a closer look into the life of one top table tennis player, Dimitrij Ovtcharov, a German Table Tennis Player with Ukrainian roots.

Dimitrij Ovtcharov is one of the best players in table tennis history. His impact is immense, and he’s always intentional in his games. His love for table tennis is genuine, just from how he plays and practices.

This article will highlight his early life and how his passion for the game has been growing over the years until now. 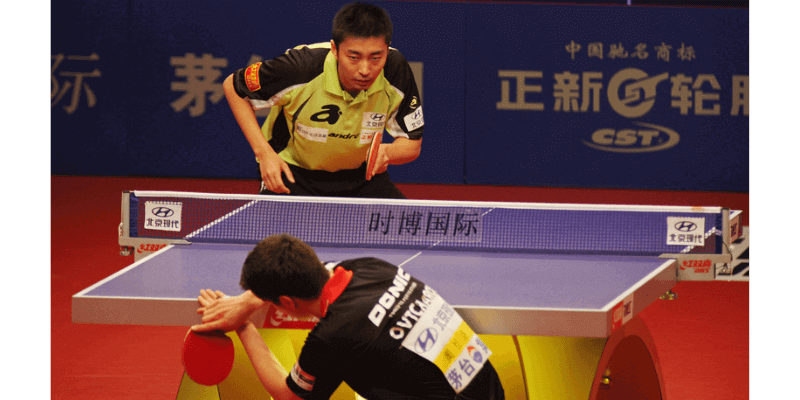 We will also get a chance to see his profile, achievements, family life and success over time, net worth, and equipment history.

Dimitrij Ovtcharov was born in Kyiv, Ukraine, on September 2, 1988. He has ever since been representing Germany in table tennis, but he is a Ukraine native.

After the Chornobyl tragedy in 1992, his father, Mikhail Ovtcharov, decided to relocate his family to a much safer state, Germany. Dimitrij was four years old then.

After staying for some time in Germany, he started showing interest in table tennis. When his father saw this, he offered him constant support in his early career life. His dad was also a table tennis player and coach.

He understood and knew what he needed as he kick-started his table tennis career. Ovtcharov was dedicated to helping him become better and better every other day. 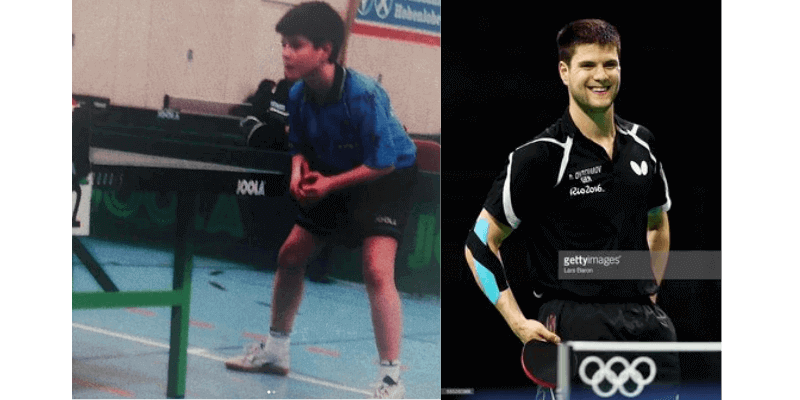 One of the best World-class players TIMELINE TO SUCCESS!

His father’s love for the sport also impacted him significantly, as it motivated Dimitrij to become a better version of himself daily. As his career peaked, his dad was the undisputed Soviet table tennis champion in 1982.

Dima’s joined his first-ever table tennis club in Germany. It was called TSV Schwalbe Tundern, which he became part of not long after he seriously started practicing table tennis.

This club-shaped him into a great professional table tennis player. He was able to achieve a lot while he was in Schwalbe. Dima climbed to the 1st Bundesliga and became among the highest in the German Division.

Dimitrij Ovtcharov created a unique service while still at Schwalbe until 2007. The family atmosphere in Tundern also allowed him to focus entirely on table tennis.

Dimitrij Ovtcharov Olympics and Other Achievements

Here is a summary of his achievements over the years in the World Cup, World Championships, and Olympic Games:

At the 2008 Summer Olympic team events in Beijing, Dimitrij won a silver medal alongside Timo Boll and Christian Sub. Here, he used a special technique in his serves that was picked by Time Magazine, which identified it as one of the top innovations of 2008.

In the World Cup 2017, he won against Timo Boll, marking a huge milestone because he defeated one of the World’s best table tennis players.

In June 2015, Dimitrij won a gold medal at the inaugural European games.

Two years later, he won the Gold Medal at China open against Timo Boll (where he scored 4 and Boll 3), and in August 2017, he won the title at Bulgaria open. In March, he played in the World table tennis championships in Doha. His first most significant victory came in the 2002 Youth European Championships, whereby he won silver. He later ensured that he settled for the gold and claimed it in 2005.

At just 19 years, he won bronze at the senior level competitions in the 2007 European Championships singles event. This was a huge accomplishment for a 19-year-old at that time.

Dimitrij Ovtcharov is a right-handed player who uses the European shakehand style of play. He portrays such a unique style of play, especially regarding serving.

Dimitrij Ovtcharov has two common styles of serving, famously known as the ‘corkscrew’ and the ‘tomahawk.’ Many of his fans are pleased with his serving techniques, saying he is one highly skilled table tennis player.

His serves are notably different from other players, making him stand out. He has been using this type of service ever since he was young, as he began his table tennis career. Dimitrij has therefore perfected the art and become the leading expert. He assumes a bent-down posture in a full squat when serving. Ovtcharov positions his feet perpendicular to the table and towards the direction of play when making a corkscrew. This is the same service Time Magazine stated to be one of the top innovations of 2008.

When it comes to the forehand and backhand, both are super powerful. He uses his forehand to execute banana flicks mainly. For his backhand, he often uses strokes and pushes. However, the strokes are easier shots for him compared to the stimuli.

His footwork is just perfect, and he can comfortably and swiftly convert when the need arises in a gaming situation. He can change into a more neutral position when the rallies become faster.

Dima currently ranks in 1st place in the whole of Germany and 3rd place in Europe. He ranks 9th worldwide according to the International Table Tennis Federation (ITTF) World Rankings as of November 2022.

He enjoyed his short moment of Glory at rank one from January to February 2018. This is the highest rank he has ever achieved. His fans acknowledge this period as one of his greatest achievements. Even though it was a short one, it was worthwhile. All in all, Dimitrij Ovtcharov is one of the top 10 best table tennis players. He has been raising the ranks gradually and through his outstanding achievements.

Ovtcharov has even managed to defeat great players like Timo Boll. He was just at position 72 when he met head-to-head to compete with Timo Boll. This was a great honor to him.

His net worth is estimated to be around $ 16 million, with table tennis being his primary source of income. This amount was generated throughout his table tennis career and the awards and prizes he has won.

He is a world-renowned table tennis player who recently encountered trouble when he tested positive for Clenbuterol in a doping test. The German Table Tennis Federation (TTBL) imposed a temporary suspension on him as punishment.

However, Dimitrij denied any wrongdoing and called upon another Sample B drug test to be conducted to prove his innocence. It remains uncertain whether justice will prevail for this star athlete caught up in controversy!

Dimitrij’s dad was technically his coach. He has been training him from a tender age as he began his career. His dad started coaching him when he was 9 years old.

Dimitrij then shifted to TTC Neu-Ulm, where he currently plays. His dad coaches this team too.

He was also coached by Jorgen Persson, a Swedish table tennis player, and coach who has won 4 World Championships. His mother (Tatiana Ovtcharov) also coached him. She trained her at the beginning of her career. Dima once said it was easier when his mother trained him than his father.

His mum was patient with him and ensured that he fully understood all the basics as he began.

He is a renowned table tennis player and coach. Mikhail was the Soviet individual table tennis champion in 1982 with 80 appearances in the national team. In the early 90s, he played for the second-division team Schwalbe Tudern, a district of Hameln in Lower Saxony. He is married to Tatiana, who also has an A-license coaching certificate. Dima also said that his dad is his greatest confidant. From his family line, we clearly can tell that he was born into a family of table tennis players.

Dimitrij is married to a beautiful Swedish table tennis player called Jenny. They got married in 2013. Jenny grew up in Umea, Sweden, where she kick-started her table tennis career.

She won a couple of Swedish Youth Championships in table tennis in 2002, 2003, and 2009. She played for the Swedish national team for eight years. Jenny and Dima have a daughter, Emma, who was born in 2016. More details about Dima’s personal life are available on the Livesportworld website.

Dimitrij Ovtcharov is a Butterfly-sponsored player. He also had a previous partnership with the Donic brand.

He uses Butterfly equipment. His blade is the Ovtcharov Innerforce ALC Blade. For the rubber, he uses the Butterfly Dignics 05 for his backhand and Dignics 09C for his forehand.

As he began playing table tennis, he used a Waldner Senso Carbon blade and Coppa rubbers. He decided to change to a Butterfly blade to meet his increasing gaming demands.

The Butterfly’s Arylate Carbon (ALC) (also the Dimitrij Ovtcharov Innerforce ALC Blade) contains five plywood and two carbon layers. The blade’s reaction is at 11.7, and the vibration is at 10.5. The carbon’s strength meets Arylate’s ability to reduce vibrations. It is a perfect blade with unique qualities that define its speed and performance.

This table tennis blade is best for close-to-the-table 2-winged attackers like Dima. This ping pong blade will suit you if you play table tennis regularly and with an attacking style.

This rubber’s top sheet is sticky. Thus, it’s able to generate strong topspins. This is one of its advantages. It also combines Spring Sponge X technology, an advanced version of spring sponge containing more elasticity.

Its surface offers excellent resistance. You will get a high bounce level because of the synergy effect between the original top sheet and a rather hard spring sponge x.

This table tennis rubber also has an upgraded friction High tension feature for players who want to feel the effect of the friction rubbers.

It is a medium-hard table tennis rubber. Dignics 05 rubber also features the spring sponge x technology. This technology helps to “hold” the ball longer onto the bat. This rubber has similar characteristics as the Dignics 09C. The grippy top sheet allows you to produce numerous amounts of spins.

This means that shots and banana flicks are strong. It gives direct loops with higher trajectories and a lower throw angle, making it fit for close to medium distances from the table. Dignics 05 excels in the counter-looping game.

If this is your thing, you must have this excellent table tennis rubber. It is also high-quality and very durable.

MORE DETAILS ABOUT THEIR MATCH RESULTS!

Dima and Lin Yun Ju are World-class players today with an aggressive attacking style. They have a lot of gold, silver, and bronze medals in the table tennis championships.

To be a great player, dedication, endurance and determination are the key factors. Dimitrij’s dedication placed him at the top position among many other great table tennis players.

He also received the proper guidance and utmost support from his family and friends.

Those who look up to him are equally capable of being great, just like him, if they want to. It is always a matter of personal responsibility, whereby you take up the challenge and aspire to put in the effort and become better every day. The journey to success also begins early because, just like Dimitrij, you practice much while still young and have a lot of time.

This year Dima stated on Twitter that he is happy to play table tennis in the Champions League season. Dima is now 34 years old and still has great success in this sport.

The skills that you learn while still young are always difficult to forget. In fact, you end up perfecting them while you are older. You can walk in Dima’s footsteps to be great like him. 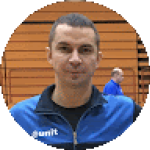