Today’s best table tennis glue is inorganic, which the ITTF declared to be the only valid and recognized glue from the Olympic Games in 2008 until today.

The use is different than with previous quick glues but quite simple. Before you look at more detailed analyses and ways regarding the gluing of a table tennis racket, please take a look at our table of shortlisting racket glues.

The most important thing before the analysis of table tennis glue

Firstly, apply a thin layer of glue with a sponge that you get with any glue from our choice. The time required to dry is 25-30 minutes. After that, rubbers will have a full effect depending on how often you practice.

With training 3-4 times a week, you are free for 4-6 months once you stick. As a player with 25 years of experience in table tennis, watch the video where I glue a friend’s table tennis racket. You can also see the way of gluing on this site on the page How to assemble a table tennis racket.

Now it’s time for the glues from our shortlist, most of them are similar in terms of characteristics, but we also have special ones that are the best-selling in the world of today’s table tennis. 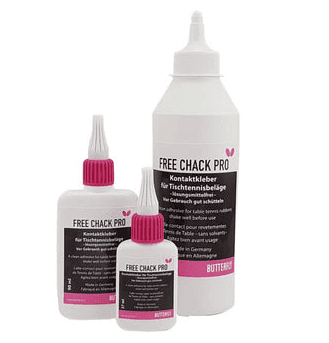 Not because it is in the first place on our list, but it is really the current best table tennis glue in the world.

It is made of 100% liquidized natural caoutchouc and does not contain organic solvents. This is a more advanced version than Free Chack I and also has stronger sticky properties. So, this means that it holds rubber harder and better on the racket when you glue it.

The glue takes a longer time to dry, about 20 to 30 minutes, but evaluate it yourself when you see that the white color is slowly disappearing. The glue is such that it can be easily removed from the blade or rubber later during the next gluing.

There are several different packages of glue, but we have presented the most requested by the players, 90 ml. So, with this amount, you can glue your favorite table tennis racket approximately 10 times.

Another important thing is that you will do it very easily when removing the rubbers for the next gluing, and you will not damage the racket. In this way, you can glue one rubber several times while maintaining the same quality.

Above all, it is used by top table tennis players worldwide, and perhaps the best example is Timo Boll. In addition to the glue, you also get lubricating sponges and instructions to get the maximum effect. 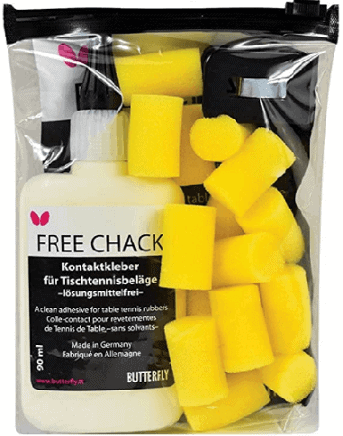 What we like is that even if you make a mistake, there will be no damage. On the contrary, you will take it, and you will correctly repeat the procedure without any bad consequences for your racket. 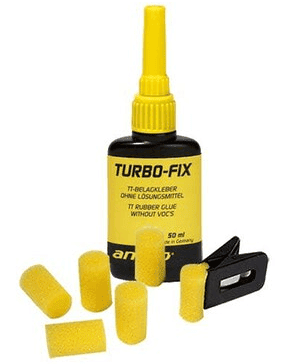 Firstly, this is a glue that is produced in Germany according to the best standards of the Andro brand.

Secondly, it is water-based and does not contain VOCs “Volatile Organic Compounds.”

Moreover, VOC  is a volatile organic compound used to make glues, making them more liquid to use. As a result, its evaporation releases substances into the air, which causes an odor until it dries. In addition, with this choice, you get 15 sponges and tools for buttoning and applying glue on rubber and blade.

Firstly, a bottle of glue is enough for 8 to 10 rackets if used correctly and applied to rubbers.

However, Andro Turbo Fix Glue is totally FREE of volatile organic compounds, and it is made from 100% liquidized natural caoutchouc.

When it comes to drying, we can say that it dries faster than our previous model. In this case, 15 minutes is enough to wait. For best results, pay attention to the size of the sponge pores in your rubbers. For example, if the pores are large, you need thicker glue and vice versa. However, Turbo Fix is ​​an adhesive recommended for rubbers with larger pores and thicker table tennis rubbers.

In conclusion, this is a much more cost-effective glue when it comes to price.

To sum up, if you don’t plan to glue the racket often, we recommend Andro Turbo Fix as one of the best for the budget. Another of the best table tennis glue is produced in Germany. It is made according to all water-based standards and without the previously mentioned VOC.

Donic Vario also has good characteristics and high drying speed. There is no health risk, and the smell is the same as with any other, but minimal. Sponges are included in the packages, and the drying speed is about 5 to 10 minutes, which is very fast compared to other glues.

Easy to handle, and the price is very affordable. The only important thing is to pay attention to the moment when the rubbers are glued because they must not dry out too much. For example, due to its speed, be on standby and after a maximum of 10 minutes, start putting rubber on the blade.

This way, you will achieve the best characteristics and have a long effect on the game. Moreover, it is made in accordance with the valid ITTF regulations, and in this 37 ml bottle, you also get 6 sponges with one button for easier handling.

All in all, it is recommended to store the glue in a dry and relatively cool place after use. This is the largest package we have presented because we think there are certain needs for table tennis clubs with more players.

That’s why the price is higher because you have a quantity for a lot of gluing. We recommend it to either coaches or multi-player communities because it is really cost-effective and good for gluing often. Individuals should not take such a large package since they will glue the racket only 2-3 times a year.

The glue is based on latex and does not contain solvents. It preserves rubber very well and dries quickly. In this package, you also get 50 sponges that you will need one for each gluing.

Most importantly, it’s about Joola Lex glue in that it is easy to peel off the rubber and blade when you want to re-glue the same racket. For example, by simply rubbing with your fingers or a soft sponge, you can remove everything in ten minutes. 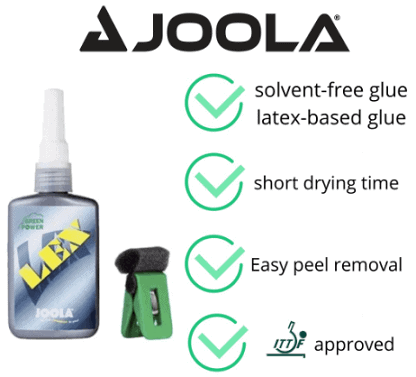 Since the price is stated for 1000ml, if we compare it with other glues, it will be $ 5 per 100ml, which is quite affordable. Revolution 3 table tennis glue is an innovation in the market.

It has better results than the previous ones and what makes it special is that after removing the rubber, it stays smooth and clean, and the glue is only on the blade. For example, you can easily remove just a layer of glue from the wood and re-glue the racket.

With this package, you can glue the table tennis racket 10 times. We say this by counting both rubbers on one blade and so on 10 times. Another important thing and the question of why take Revolution glue?

This is because its characteristics are such that it allows a better time to keep the ball on the racket when hitting. It has such a composition, and rubber absorbs the ball better, so to speak. That way, you get more control and security in the game.

This glue has 3 types of viscosity. So, that means the ability of liquids to resist flow. When you glue the racket, you can affect the viscosity level by waiting longer for the glue to dry before placing the rubbers on the blade. Drying time is from 10 to 20 minutes, so you will decide by looking at the color of the glue on the rubber. Moreover, my recommendation is definitely “golden middle” to wait 15 minutes. 1.How should I remove rubbers from the blade?

The best way is to start at the bottom of the racket. Firstly, slowly and gently remove the rubber from the bottom corner diagonally upwards. It takes a little patience, but if you do it correctly and slowly, you will see that the glue will remain only on the blade, and the rubber will be as clean as new.

When you do that, the glue from the blade is easily removed with your fingers or a piece of felt. Keep in mind that you always slowly and gradually remove the rubber so that it does not crack.

2.Since I chose the best table tennis glue, when do I need to re-glue the rubber?

Our recommendation is not to re-glue the racket after the first gluing for the next 6 months. If you are a professional and train every day, then it would be okay to stick again in 3 months. Every player can feel it during the game because they will not have such good contact with the ball. Then it’s time to re-glue. The table tennis glues we have presented should have the effect of full contact of the ball for at least 3 months.

As we said before, the players glued the rubbers before each training session due to the effect of a faster game. However, today there are such glues on the market that no one glues so often anymore, and it is recommended to glue them occasionally when you feel that the racket has lost its initial effect.

3.How is table tennis glue applied, and how long does it take to dry?

Whichever you choose from our selection of the best table tennis glue, keep in mind that they need a certain drying time. If you stick the rubber too early, it will not grip the blade well.

Therefore, as we have already said, follow the color of the glue, and when it loses that white shine, you can start putting rubber on the blade. The way you put it is shown in the video at the top of the page and on our website on the page How to assemble a table tennis racket.

Of course, it can be simply described in words. It would help if you start from the lower part of the racket and slowly apply rubber towards the upper part, for example, at the top of the racket. You can use a roller to straighten the surface or simply squeeze it up with your hand. After that, it takes 24 hours for the table tennis racket to affect pieces of training and matches fully.

4.How many layers of table tennis glue to put on rubber and blade?

Firstly, it is best to apply one layer of glue but to apply a sufficient amount. After that, you will do this by first pouring a certain amount on the rubber and then smearing it with a sponge all over the surface. On the other hand, you will know that it is enough so that the surface will be smooth and white.

Do the same on the blade. A little more glue is needed for the blade because it absorbs faster. I do not recommend putting more layers, but if you really want, then you can make a maximum of 2.

5.What else should I pay attention to when using the best table tennis glue?

Always store the bottle of glue at room temperature and always close it. That way, you’ll be able to use it for months. See the instructions for each table tennis glues at most due to the drying time.

In this article, we have explained every glue approximately how much is needed, but it is worth looking at the instructions for a more precise time.

Keep in mind that you cannot damage your racket in any way when gluing. This is only possible when removing the rubber for re-gluing if you are in a hurry. So, it would be best if you did it slowly, and you will have a long period of nice table tennis playing with your favorite racket.